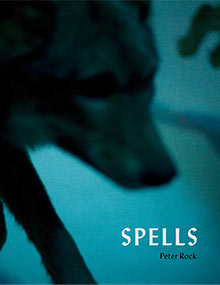 Twenty years ago, I worked as a security guard in an art museum. This museum had five floors and a basement, a guard on every floor. The way the schedule worked was that we shifted down one floor every half hour. I started on the fifth floor, in Asian Art, then the guard who was on break in the basement came up and I moved down a floor. It was a relatively easy job, in that on a perfect day nothing changed, nothing was supposed to happen. However, boredom and loneliness kept turnover among the guards surprisingly high.

I entertained myself by trying to make up a story for each photograph, painting and object in the museum; however, we guards weren't allowed to write, on the job. Bending this rule, I carried a scrap of paper and a little pencil and then, in the minute or so when I was going down the stairway to the next floor, I'd furtively scribble a few words, to remind me of the stories I'd made up in my head. And then when I got to the break room in the basement, I'd write down as much as I could, in the half hour, then begin again. Later, I'd go home and work some more on it all.

A few years ago, I found myself in conversation with a photographer. Some of the difficult artistic questions he asked caused me to reflect on where I was with my work, and where I'd been, and reminded me of some of the pleasures and play that I was in danger of forgetting. In telling him about my museum guard writing, I began to envision a similar project.

First, I found photographers whose work I was drawn to, and contacted them with a very hypothetical and tentative description of what I was doing.  Somewhat arbitrarily, I decided that five photographers would be a good number; I was gratified that the first five* I contacted were excited to join me. Next, I let these photographers know why I was drawn to their work, noted some images I really admired, and shared some of my previous writing with them. I asked them to send me 20-30 images; of these, I chose five at a time, and proceeded incrementally, generating the specific stories as I went.

The images are not merely illustrations for a pre-existent story, then, but the conditions and possibilities and limitations of how they proceeded. The images came first. One way to think of it is that the stories herein, and the larger story they become, were already embedded in the photographs. My attention and intuition acted as a kind of excavation that brought them to the surface, into words.

I've recently been named a 2014 Guggenheim fellow to pursue this project, which will hopefully be a book, but may also be a gallery show, and may take the shape of a long film, its words recorded, each piece scored by different musicians. The short films above are only a very rough approximation.

Sophie Borazanian was born and raised in Cleveland, Ohio. She left the rust belt part of the state for the Appalachian hills while she attended Ohio University for Photojournalism. After graduating she continued south to New Orleans where she has been living for the past four years. She has been documenting her life in the city while moving through the various crowds and jobs she finds along the way. Inspired by the Art Deco architecture of her hometown she is now making her images into large collages found in mural form on the side of businesses around the city.
sophialeeborazanian.tumblr.com

Sara Lafleur-Vetter is a multimedia journalist with a passion for telling stories of the underdog and the underbelly of society. As a videographer, photographer, writer, and radio journalist, she's covered everything from social orphans in Russia to foreclosure and spoken word poetry in the Bay Area. She holds an interdisciplinary degree in Anthropology and Russian from Reed College. Lafleur began her journalism career in St. Petersburg, Russia, where she documented local NGOs including an organization for the homeless, a kid circus, and an institution for the disabled. Afterwards, she lived in Luxor, Egypt documenting ancient temple blocks for the American Research Center in Egypt. At present, she's wrapping her Masters at Berkeley Graduate School of Journalism, where she recently won a 2015 Dorothea Lange Fellowship. Her thesis documentary covers a California clinic treating current and former needle drug users, folks previously trashed by the medical system, for Hepatitis C. Her work has appeared in CNN Traveler Magazine, The St. Petersburg Times, Fodor's Travel Guide, San Francisco Magazine, and the East Bay Express. She's currently based in Oakland.
www.saralafleur.com

Peter Earl McCollough (b.1982) was raised by his mother in Davis, California. In 2000 he enlisted in the U.S. Marine Corps and took part in the invasion of Iraq. In 2008 he graduated from the Photojournalism program at Ohio University. He has worked as a freelance photographer in the Bay Area since 2010, including a staff position at Wired Magazine, and frequently shoots for The Wall Street Journal, Newsweek, The San Francisco Chronicle, and other media outlets. He is currently based out of Oakland, California, where he splits his time between photography and filmmaking.
www.petermccollough.com and petermccollough.tumblr.com

Shaena Mallett was raised on a homestead in Ohio along the dividing line between Amish country and the rust belt. She currently works as a documentary photographer, filmmaker, and teacher, focused on telling stories about family farms, connections with land, and the long journey home. Based in North Carolina, her current project, Farmsteaders, is a short documentary film intimately narrating the daily experience of a farmer philosopher father and his incredible family as they struggle to run a sustainable dairy farm in the devastated food economy of rural Appalachian.
www.farmsteaders.com
www.shaenamallett.com

Colleen Plumb's work centers upon examining the human ambivalence towards animals, and the contradictory ways they are woven through the fabric of American culture. Animals Are Outside Today, her first monograph, was published by Radius Books in 2011. Plumb's work is included in the permanent collections at the Museum of Contemporary Photography in Chicago, Milwaukee Art Museum, Ruttenberg Collection in Chicago, Fidelity Collection in Boston, and elsewhere. Solo exhibitions include Dina Mitrani Gallery and The Screening Room in Miami, Blue Sky/Oregon Center for the Photographic Arts in Portland, Jen Bekman Gallery in New York, van Straaten Gallery in Denver, Union League Club of Chicago, and the historic Chicago Water Tower Gallery. Plumb's work has been featured in The New York Times LENS Blog, Photo District News, Ireland's Blow Photo Magazine, and Time's LightBox.  With the support of a 2014 Chicago Department of Cultural Affairs grant, continuing through 2015, Plumb is installing public video projections of her long-term video project about elephants living in captivity. The nine-minute video is projected onto different walls and surfaces—injected into the public space in all areas of the city—looping continuously after sunset at each location.  Colleen Plumb was born and raised in Chicago (1970), and holds an MFA in Photography from Columbia College Chicago (1999), where she is currently an adjunct faculty member.
www.colleenplumb.com

Spells at Blue Sky was made possible by a Creative Heights Grant from the Oregon Community Foundation.